Skip to content
Home → About → Leadership
More in this section 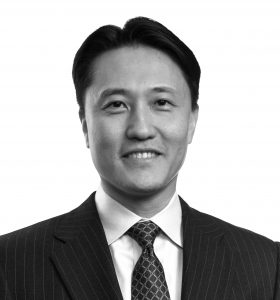 Michael Kim, Pharm.D., is an entrepreneurial pharmacist and currently owns multiple pharmacies in the District of Columbia and Maryland.  Dr. Kim has been the recipient of several awards since graduation including the Bowl of Hygeia award, the Howard University College of Pharmacy Alumnus of the Year award, and the Washington DC Pharmacy Association Pharmacist of the Year award.  He has been featured in multiple pharmacy publications and has been interviewed by many news media such as CNN, NBC, ABC, and NPR.  Dr. Kim is the current Chairman of the Care Pharmacies Board of Directors, a Vice President of the National Community Pharmacist Association (NCPA), a co-founder of Indy Health Solutions which is the only independent pharmacists owned Med-D plan that launched in 2020 and sits on many other Boards and committees.  He received his Pharm.D. from Howard University in 1998 and was part of the first-ever entry-level Pharm.D. class to graduate from the College of Pharmacy. 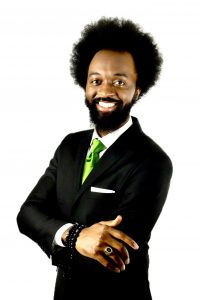 Dr. Alsean Bryant constantly lives his life at the intersection of medicine and music. Enraptured by his passion to help and empower others,and his love of the entertainment arts, he is embracing every dimension of himself to bring his dreams to life. By day, Dr. Bryant is a residency-trained Strategic Response Team Clinical Pharmacist with the AIDS Healthcare Foundation for the DC, MD, and VA regions. In this role, he uses both his clinical expertise and creative skill sets to deliver optimal health services to patients, and spearhead initiatives to promote wellness while building strong partnerships within communities of need. Through collaborative practice, he is also one of the Pre-Exposure Prophylaxis (PrEP) providers for AHF Wellness Clinics. In his previous role as Executive Director of CMS Health Initiatives, Dr. Bryant co-wrote grants and successfully managed a nearly one million dollar budget which was used to provide health services to underserved communities of the Washington DC Metropolitan Area. With over 10 years of experience in the nonprofit HIV specialty care space, he has been considered a subject matter expert in the field. As an officer of the WDCPhA, he looks forward to exploring fun and effective ways to engage the pharmacy community, and rallying members to help advance the profession in the District.

By night, Dr. Bryant serves his creative talents. As an artist, he is a singer/songwriter who writes music for himself and others; and has landed over two dozen song placements with artists and TV/Film including BET, Tubi, and Netflix. He is also a production administrator at StarMakers Productions and has become a student of learning the ins and outs of music licensing. Additionally, he is a member of the Washington Football Team Marching Ban

d Drumline; and currently serves as Creative Genius for Artbae – the 2020 winners of DC’s Emerging Creative Award of the 35th Annual Mayor’s Arts Awards. In addition to writing songs, Dr. Bryant was a contributing author in “I Wear A White Coat,” a book whose mission is to unveil the truth in the aspiring Black doctor’s journey and inspire readers to actively pursue their dreams. 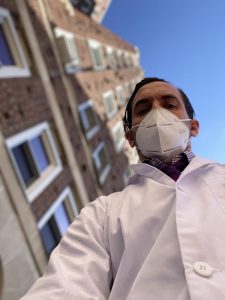 Born and raised in the District of Columbia. He graduated from MCPHS- Worcester with a doctorate in pharmacy and the University of Massachusettes with bachelors in Biochemistry, minor in Microbiology. Ten years ago, he took great pride in returning to his birth city and serving as a front-line practitioner in the inner city, the neighborhood he grew up in. He’s committed to improving the health and well-being of the communities he serves.  Passionate about providing strategies and tools to guide people to better decisions and outcomes regarding their health, both physical and mental.  He supports community outreach and advocates for the expansion of the role of the pharmacist. He is a Diabetic specialist pharmacist and focuses his practice on preventive not just curative measures. He takes pride in providing health services, such as blood cholesterol/glucose/pressure screenings and immunizations at different sites around the city. He has given classes on Adherence, Opioid epidemic, and Medication Therapy Management.

Juan served as a research assistant at John Hopkins, National Institute of Aging where he was published in the Journal of Chromatography.  He has held internships at HRSA and DEA.  He is the recipient of the Washington DC Pharmacy Association (WDCPhA) distinguished young pharmacist award. He’s directly coached and mentored over 30 student doctors and pharmacists, helping them to engage them in their role as a trusted practitioner.  He has worked with Linguistic horizons at Hampikamayoq clinic in Peru where he attended to patients and studied Andean plant-based medicine and its use in practice.

He is committed to reducing health disparities and addressing health equity in DC. He believes the benefit of pharmacists is invaluable and essential in reducing costs, preventing further health injustice, managing pandemics, and exacerbating chronic diseases in our communities.

Dr. Jackson is currently employed as an HIV/AIDS Administrative Pharmacist with the District of Columbia Government, Department of Health.  In the past 20 years, she has worked as a Pharmacy Inspector/ Investigator and a Clinical / Distribution Pharmacist. She started her career in pharmacy as a volunteer, then quickly became a technician at Providence Hospital. After graduating from Howard University’s School of Pharmacy, she was offered a position as a Staff Pharmacist.  For career advancement, she accepted a full-time position as the Assistant Director at The Hospital for Sick Children. In 2017, she was honored to receive the 2017 Pharmacist of the Year Award from the Washington DC Pharmacy Association.  She hopes to continue to provide quality healthcare and customer service to those in her community.

Dr. McKoy-Beach is a graduate of Howard University College of Pharmacy, and Fisk University with a degree in chemistry.  She’s completed two residencies, one in Pharmaceutical Care at the Veterans Affairs Hospital in Miami, Florida, and the other in Infectious Disease from SUNY Buffalo School of Pharmacy in Buffalo, New York.  Currently practicing as the Clinical Assistant Professor at Howard University College of Pharmacy in the Department of Clinical and Administrative Sciences she is also a clinical preceptor at two practice sites: La Clinica del Pueblo in northwest Washington, DC, and Howard University Hospital Anticoagulation Management Services.  In addition to providing direct patient care to patients at those sites and training 4th-year pharmacy students, pharmacy residents, and pharmacists in the Non-traditional Doctor of Pharmacy Program she has been a member of the Washington DC Pharmacy Association (WDCPhA) for approximately 4 years.  She also served on the Board of Directors in 2016 as the Director-at-Large for Education and Programs. 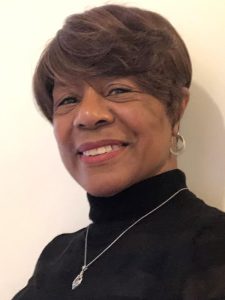 Carolyn Rachel-Price R Ph, ASCP is a consultant pharmacist whose expertise is directed toward ensuring positive patient outcomes in the most cost-effective and efficient m

She is a graduate of Xavier University of Louisiana College of Pharmacy and has practiced in the District of Columbia for over 30 years.  After a 26-year career in the DC

government, she retired and is now the President and CEO of Essential Pharmacy Services, Inc., (EPS, Inc.) a DC-based pharmacy consulting company that specializes in consulting services for government and private companies. EPS, Inc. works with agencies and clients in every quadrant of the District of Columbia helping residents live better, healthier lives. 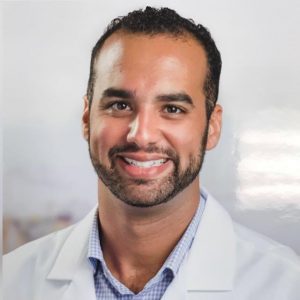 Samir has served DC residents in a variety of capacities and was the pharmacy manager at Giant-Shaw for more than three years. He’s since moved to Clinical coordinator of the company and has continued to assist in the stores when necessary. Samir believes that being Director of Education will enable him to take his years of experience as a community pharmacist, coupled with his knowledge of clinical programs, and share best practices and strategies with his peers. He is devoted to helping and promoting the profession by recognizing the issues and developing solutions for pharmacists in the District.

Matthew L. Boyd is a Medical Scientific Liaison at Janssen, the Pharmaceutical Company of Johnson & Johnson. In this role, he is responsible for communicating medical-scientific data, connecting internal and external stakeholders, supporting clinical research teams, and serving as the treatment area expert on internal and cross-functional teams. In addition, Matthew is the Diversity and Inclusion in Clinical Trials (DICT) ambassador for the Lymphoma | Myeloid Oncology team.


Matthew is a true team player and always manages to foster positive, productive discussions and bring the best out of his team members. In his positions, he has led the development of protocols, best practice guidelines, evidence-based pharmacy care models, and the formation and dissemination of complex data which promoted the safe and effective use of medications to reduce practice variation.

He was instrumental in working with the WDCPhA to push for the passing of CPA legislation.

Matthew earned his Doctor of Pharmacy degree (Pharm.D.) from Shenandoah University Bernard J. Dunn School of Pharmacy and is starting his Executive Master of Business Administration (EMBA) at the Darden School of Business at the University of Virginia (UVA) in the fall of 2021. Matthew enjoys spending time and exploring the world with his wife Jon’ll, two sons Alexander and Jackson, family, and friends.

Alain Temgoua, Pharm D is a resident of the District of Columbia and is licensed to practice in the District and Maryland.  He graduated from the University of Perugia in central Italy, and has more than twenty years of practical experience in the US and Europe.  He currently practices as the pharmacy manager with Giant Foods at a newly renovated store in the Washington metropolitan area.  Before joining Giant in 2014, he worked as an independent pharmacist and has volunteered with many organizations in the DMV like the Center for Minority Studies and Martha’s Table.  He is an active member of the DC Medical Reserve Corps, and is fluent in French and Italian.  Since becoming a member of the WDCPhA, he currently serves as a member of the Membership Committee and has been active in WDCPhA activities.

Dr. Temgoua states that if elected to the WDCPhA BoD, he will work diligently to help the WDCPhA grow to its fullest potential.

No upcoming events at this time.